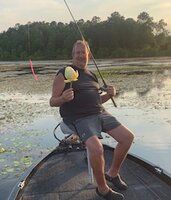 Brian Gruver was born May 27, 1967, in Pensacola, Florida but a long-time resident of Bonneau, S.C. He passed away peacefully at hospital in Moncks Corner, S.C. He was preceded by his parents, Chuck and Hilda Gruver and his sister, Brenda Gruver.

He loved to fish, dance, and have a good time. He enjoyed spending time with his family and friends.  He graduated with an Associates degree. Brian previously worked at Precision Tune as the District Manager, for the low country division. He previously lived in Spartanburg, S.C. and owned The Auto Shop.

There will be a celebration of life ceremony at the lake in Bonneau, S.C., since this was his favorite spot to spent time with his family and friends.