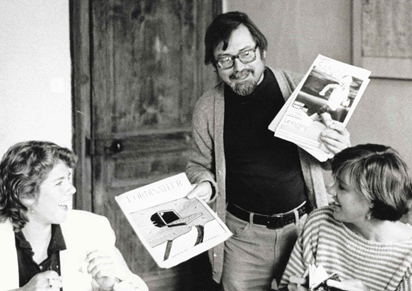 Gérard Roger Montbertrand died peacefully in his bed at the age of 81 on Monday, September 2nd 2019, after a long battle with Parkinson’s Disease. He was Professor Emeritus at the College of Charleston, where he taught in the French Department from 1987 until his retirement in 2011. Born on June 9th, 1938, he was son to Colonel Gabriel Montbertrand and Renée Farret, née Vandel, and stepson to Général Henry Farret.

He is loved and deeply missed by his devoted daughters Carine and Michelle. He cherished Stephanie Fauvelle Larson, as well as his many lifelong friends in France, and those he met in the United States after he arrived here to study and teach in his late 20s. He graduated from Lycée Carnot in Cannes, France, where his grandfather was headmaster, then received his Licence en Droit from the Université de Nice and a PhD in French from Rutgers University, where he graduated with distinction.

Over the course of his career he was proud to have taught at several renowned institutions, including Princeton and Tufts Universities. His expansive knowledge of French literature and culture was shared with thousands of students. In the classroom he was a charismatic teacher, a natural actor and educator, who inspired his students with his rigor and his infectious love of all things French. Although he specialized in 17th century literature, he taught and studied well beyond, taking great interest in Québécois as well as French writers from all eras. His classroom was full of laughter and sometimes transformed into a theatre where students performed scenes from the plays of Molière or Ionesco. He had a fantastic sense of humor, inspired by his appreciation of words, rhyme, and the absurd. He wrote volumes of articles and poetry, and gave many successful conferences in the US and beyond. His lifelong collection of books he called “mon âme", my soul, and he loved the theatre, music, art, film, philosophy, logic, rhetoric, good grammar, dictionaries, and history’s great thinkers (especially the French ones). He loved watching the World Cup and the Olympics, going to bookstores, drinking beer, champagne, and cognac, having parties, eating great food, doing the “free dance”, playing devil’s advocate, being a contrarian, and having passionate conversations until 4am.

Throughout his life he remained attached to his hometown of Cannes and spent his summers there, happily hosting his friends and family. A celebration of his life will happen in the coming months, free dancers welcome. IN LIEU OF FLOWERS, donations can be made to the Michael J. Fox Foundation for Parkinson's Research - https://www.michaeljfox.org/donate

To send flowers to the family or plant a tree in memory of Gerard Montbertrand, please visit Tribute Store

Share Your Memory of
Gerard
Upload Your Memory View All Memories
Be the first to upload a memory!
Share A Memory
Send Flowers