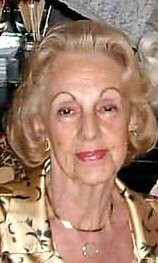 Doris was born in Pforzheim Germany. As a small child, Doris by God’s Grace, survived the heavy bombing of her home during WW II.She later attended trade school and became a designer of women’s clothing.

At the age of 23, she met and married a United States Air Force soldier, Francis Higgs before immigration to the US. First residing in Elizabeth, NJ, Doris later moved to South Plainfield in 1967. After several years’ employment working in the plastics industry, Doris established her own business until the passing of her beloved husband, leaving her a widow at 53 years old.Her love for children, led Doris to begin a Home Day Care that she ran for 20 years.

Doris devoted her life to her family and many children who she raised through her daycare. She will be greatly missed by her family and friends’ who loved her. Fly high and Free with the Angels above, you will live in our hearts until we meet again. Upon her request, after a celebration of her life, Doris will be buried alongside her husband in NJ at a later date. Donations should be made to St. Jude Hospital for Children her favorite charity.