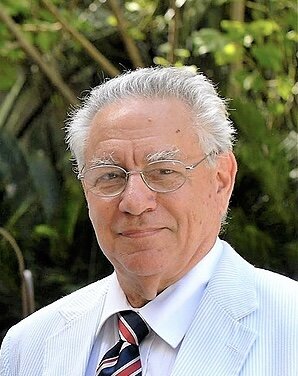 Alfred Leon Crabtree, Junior, Master Silversmith and Metalsmith, entered into eternal rest in his home on March 7, 2022 after a short and courageous battle with cancer. A memorial service will be held on March 20, 2022 at 2:00 p.m. at First Scots Presbyterian Church.

Born September 6, 1936 to Ruth  Fee Pendarvis Crabtree and Alfred Leon Crabtree in Somerville, MA, Al came to Charleston nine months later. Following his father’s death in 1944, Al lived with his mother’s extensive family, as she worked as a private nurse. He graduated from St. Andrews High School. Al left the Citadel to pursue a career in the aircraft industry and start a family. Charleston lured him back, and he took a job in chemical research at Westvaco. He served eight years in the United States Navy Reserve. His continued enthusiasm for boating led Al to teach boating safety courses with the US Power Squadron and achieve the rank of commander. While he introduced the joys and preservation of nature to his growing family, Al experimented with metallurgy. This hobby quickly evolved into his life’s passion, and he opened The Brass & Silver Workshop in 1968. Al, together with his wife Charlotte, opened The Silver Vault of Charleston in 1995. His work is on view across the country including at The Citadel, Museum of Early Southern Decorative Arts, The Charleston Museum, the US Navy and Air Force, numerous historic churches, LPGA, Colonial Williamsburg, Metropolitan Museum of Art, and Historic Charleston Foundation. The latter honored Al with the Samuel Gaillard Stoney Conservation Craftsmanship Award in 2007 and 2011. Al twice served as a master for apprentices from DeValchool, the Netherlands. He crafted and donated the last piece of Charleston silver made in the 20th century to the Charleston Museum. In 2021 Congresswoman Nancy Mace awarded Al with a Special Congressional Recognition for his outstanding and invaluable service to the community.

Al was an elder and devoted member of First Scots Presbyterian Church, Union Kilwinning Lodge No. 4 AFM, the Caledonian Club of Charleston, President Rutledge LOL No. 1776, and South Carolina Silver Society. He was a life member of the Scottish Society of Charleston.

In lieu of flowers, the family requests donations be made to the Sarcoma Foundation of America, First Scots Presbyterian Church, Museum of Early Southern Decorative Arts, Historic Charleston Foundation, Drayton Hall or a charity of your choice.