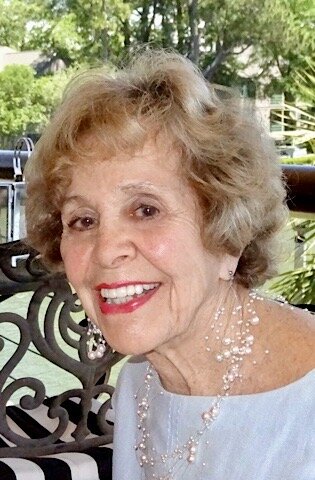 Frances D. Robertson loved literature, and her life story is as engrossing as any book she read. A first-generation American citizen, she embraced arts, education, politics, gourmet cooking, sports, and above all, family. Born Frances Elena Dellosa in Mount Kisco, NY on May 29, 1929, she died peacefully in her sleep from complications of dementia on April 19, 2022 at the Bloom at Belfair in Bluffton, SC. She was 92.

Her parents, Donato and Lucia Dellosa, were Italian immigrants from Casoli in the Abruzzi region. Her father toiled in construction building roads for WPA projects during the Great Depression. Her mother ran a restaurant called The Blue Ribbon Inn, a gas station and an alterations business, and managed rental apartments on their family property in Mahopac, NY. Their home was surrounded by luscious vegetable gardens and fruit orchards. Frances had a strict Catholic upbringing, but her parents also encouraged her to be independent and learned. The irate local police were happily softened in 1941 by homemade pasta and wine after bringing Frances in for illegally driving the family car through town at age 12. It is not entirely known as to whether such behavior inspired lawlessness in her progeny, but likely led to her lifelong habit of gunning the car past seen and unseen obstacles.

Frances was the first in her family to attend college after having excelled in high school and graduating a year early. She studied at Pennsylvania College for Women (now Chatham University) in Pittsburgh, PA and received her bachelor’s degree from Syracuse University in 1950. Frances worked as a script assistant at NBC-TV in New York for “Your Show of Shows” starring Sid Caesar and Imogene Coca. Later, she was a management trainee at Seagram’s Distillery in Bristol, PA. She found her passion in education, and pursued graduate courses and a teaching certificate. She was a much-loved high school English and Humanities teacher at Pennsbury High School in Fairless Hills, PA. Her early fascination with the work of preschool pioneer Maria Montessori led her in 1965 to co-found the Children’s House of Bucks County in Pennsylvania which remains an important pillar of Montessori education for many young children.

Frances lived and entertained in Levittown and Yardley, PA and later in Hilton Head, SC. She encouraged her children – and indeed everyone she touched – to share her love of the arts. She brought hundreds of students and her own children to Broadway plays, museums and concerts in New York and Philadelphia, and loaned countless books to eager learners. She advocated for higher education, and took great pride in her children’s and grandchildren’s academic achievements. An artist in the kitchen, she crafted elaborate masterpieces including beautiful cakes for family weddings. She loved to travel, and every trip initiated new lifelong friends, all of whom were welcomed to her home to talk politics, to dance and to savor her creative culinary delicacies. Frances championed equal rights for women, minorities, and the underprivileged in society, and she backed Democratic candidates for local and national offices. She logged numerous volunteer hours over many decades for the League of Women Voters (who celebrated her 50 years of service in 2019), Action Now (a 1960s organization dedicated to improve race relations), and Lifelong Learning of Hilton Head where she taught and took classes.

Even with her myriad activities, family came first. While she was loved by nearly everyone she met, she was especially adored by her children and grandchildren. They will never forget her zipping along the beach paths on her bicycle, kicking a soccer ball on the sand, darting deftly around the ping pong table, bouncing on a trampoline, baking cookies, and dominating (and usually winning) the family Scrabble game. A hardy traveler with a smile as her passport, Frances was impervious to illness and bug bites, and happy to break into a showtune whenever the need arose. She turned every event into a party. She danced and glowed with happiness at a rousing 90th birthday celebration in 2019 attended by friends and relatives from around the globe. At family weddings, she’d grab a microphone and break into the Cole Porter tune “Let’s Do it” (lyrics: “Birds do it, bees do it. Come on, baby, let’s fall in love”). Even in her final years in Memory Care, she entertained fellow residents and staff with songs and stories.

She is pre-deceased by her husband of 38 years, Albert Robertson; her ex-husband of 18 years, Bob McCleery; her sister, Enis Carr; and her daughter, Karen who died in 1994. She is survived by four children, Kathleen McCleery (Robert Martinez) of Corrales, NM, Bruce McCleery (Whitney) of Topanga, CA, and Maureen McCleery (Vital Imbert) and Marybeth Caruso (Gerald), both of Seattle, WA. She was most proud of her ten grandchildren: Jason Martinez, Elena Martinez, Isabella Caruso, Nicholas Caruso, Julien Imbert, Madeleine Imbert, Alessandro Lingua, Juliette Lingua, Rory McCleery, and Callum McCleery. She also leaves longtime friends Betsy and Bill Peterson of Hilton Head.

Share Your Memory of
Frances
Upload Your Memory View All Memories
Be the first to upload a memory!
Share A Memory