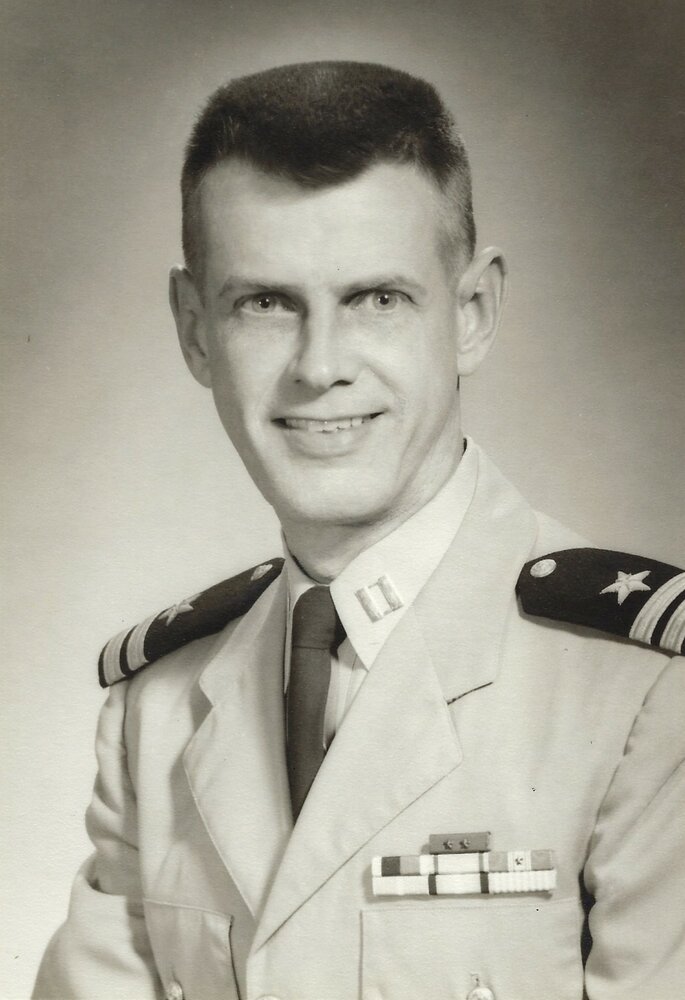 Bruce Paul Karcher, LT. USN (Ret.), 91, died peacefully at his home in North Charleston, SC on Sunday, May 1, 2022, surrounded by his family. He had several ongoing health issues which he and his wife, Carol, had successfully managed for over twenty years. A week before his death, his breathing became labored enough to seek medical attention, and tests revealed a prior minor heart attack with no obvious symptoms. The damage was not repairable at his age. However, he was lucid until the very end.

Bruce was born in Chicago, Illinois on December 30, 1930, and was the son of Victor Charles Karcher and Emily Charlotte Armbruster Karcher. He was a 1949 graduate of Decatur High School in Decatur, Illinois.

He enlisted in the U.S. Navy at the age of 17, and during his 23-year Military career he proudly served his Country as an electronics and radio technician aboard numerous ships, including the USS Franklin D. Roosevelt, USS Wiltsie, USS Lake Champlain and the USNS Michelson. After being commissioned, he served as an Electronics Officer at the Naval Weapons Station in Charleston, SC, Antarctic Support Activities at McMurdo Sound, Antarctica, Glynco Naval Air Station in Brunswick, GA, and OCEANDEVRON EIGHT, NAS, Patuxent River, MD, from where he subsequently had two deployments to VXN-8 DET WEST PAC in Vietnam. He flew numerous missions as an Electronics Flight Officer for “Project Jenny” over Saigon and Da Nang, Vietnam and Korat, Thailand. He retired from the Navy in 1971 at the Fleet Training Center, Charleston, SC. He received many medals and commendations throughout his Naval career. Bruce served his Country with Integrity, Loyalty, Honor and Distinction, and was highly respected by his peers and superiors. He was conscientious and thorough and often commended for working after hours and well beyond the scope of his assignment. He also was appointed as the lead investigator in several legal military cases.

After retiring from the Navy in 1971, Bruce graduated from Rice Business College in Charleston, SC and held Bookkeeping positions at Edwards Inc., W. C. Wilbur & Company and the Harry L. Carter Real Estate & Insurance Company. He then became a Residential Contractor for Highland Developers, Inc., a family business, and he and his wife, Carol, renovated and restored houses for eighteen years in Dorchester Terrace and Waylyn.

Bruce possessed and held high the Christian ideals and those qualities of character which made him admired, loved and respected by all who knew him.

Bruce and Carol met in 1961 at the Naval Weapons Station in Charleston, SC, where she was employed by Lockheed Missiles & Space Co. on the same military base. They were married on November 10, 1962, in Charleston Heights Baptist Church and had a wonderful life together. They both shared the same ideals and philosophy of life and complimented each other nicely. They are extremely proud of their children and family and very appreciative for their love and support through the years.

Bruce's legacy is marked with his enduring love for his wife Carol, self-effacing leadership, integrity, and a lifelong commitment to the core values of doing what is right in every aspect of life and treating everyone with kindness and respect. He was a devoted husband, father, grandfather and great-grandfather and was very generous with his time and resources. He was so dearly loved. We will always miss him and honor his memory.

He was preceded in death by his parents; his stepmother, Florence Edith Perring Karcher; from a previous marriage, a son, Douglas Bruce Karcher, who was born premature and died shortly after birth in 1953 in Great Lakes, Illinois; and four brothers, Allen Karcher, Dale V. Karcher, Victor O. Karcher and William A. Karcher.

Funeral services will be held Thursday, May 12, 2022, at 12:00 noon at Simplicity Lowcountry Cremation and Funeral Services, 281 Treeland Dr, Suite C, Ladson, SC 29456. Burial will follow at Carolina Memorial Gardens, 7113 Rivers Ave, North Charleston, SC 29406. The family will receive friends on Thursday for one hour prior to the service, from 11:00 am until 12:00 noon. A memorial message may be written to the family by visiting our website at www.lowcountryfuneral.com.

Share Your Memory of
Bruce
Upload Your Memory View All Memories
Be the first to upload a memory!
Share A Memory
Plant a Tree