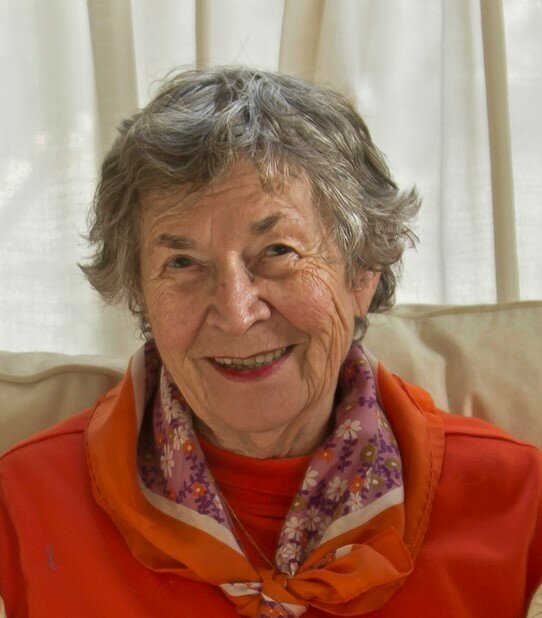 Jeanne Elizabeth Tyler was born at home to Theda Moss Tyler and Frederick N. Tyler on Dec. 2, 1923, in Gary, Indiana. Her two older brothers were not impressed at the time, but the siblings grew very close as the years passed. She attended Horace Mann High School and attended Lawrence College where she joined Kappa Alpha Theta sorority. She transferred to Purdue University as a sophomore, where she met Robert Louis Larson (Bob) her future husband. After the two attended a fraternity/sorority party together, Bob asked a fraternity brother who the “loud girl” at the party was. The rest was their love story. Jeanne graduated from Purdue with a degree in home economics.

Jeanne married Bob Larson on April 10, 1945, at a ceremony at her parents’ home during WW II. After he returned from the war, they lived in W. Lafayette, Indiana; Ohio; and Wisconsin; before settling in Anderson, Indiana in 1956. Jeanne operated a private nursery school for many years. She then went to Ball State University to get her master’s degree in education after which she taught kindergarten in the Anderson Community School Corporation. Jeanne was very active in Anderson groups, including the American Association of University Women (AAUW), Art Club, Tri Kappa, 20th Century Club, Anderson Symphony Women’s Group, and board member of YWCA. She was so proud of her service to Jesus and the First Presbyterian Church by serving as deacon, trustee, and elder (some as the first female!). Bob and Jeanne enjoyed their three children, going to the symphony (both in Anderson and Indianapolis), attending Starlight Musicals, and listening to show tunes and classical music at home. After Bob retired, they had fun travelling in an Airstream trailer where Bob took pictures that they later sold at art shows.

After Bob passed away following an extended illness, Jeanne began three-month winter visits to her brother, Fred Tyler, in Pacific Grove, California. The weather was so much better that she decided she should move in full time, and they had a wonderful time together. Fred was active in the Mayflower Presbyterian Church and Jeanne quickly joined in and made many wonderful new friends. She travelled and enjoyed her life to the fullest!

In 2019, Jeanne decided to move to Charleston, South Carolina, so she could meet her great-grandchildren, and see her daughter and granddaughter on a regular basis. She also decided her name would be Ty (a high school nickname) instead of Jeanne. This being South Carolina, that meant “Miss Ty.” After meeting the great-grandchildren in June 2019, Jeanne was ready to go home to Jesus. As her health declined, she moved from independent living to assisted living to memory care. Her optimism and good spirits never faltered. Being alone during COVID-19 was so hard on her that it decreased her mental acuity, but she was always pleasant and thankful to all around her. Jeanne’s prayer to go home to Jesus in her sleep came true on May 26, 2022. She was predeceased by her parents, siblings, and husband. She is survived by her three daughters: Leslie Larson (Craig Van Cleve) in Lyons, CO; Karen Larson (Jerry Powlas) in Clear Lake, SD; and Lorie Land (Tom Land) in Johns Island, SC. She is also survived by three grandchildren: Ryan White, Abby Land, and Drake (Amanda) Land, and three great-grandchildren: Jack, Natalie, and Mila Land.

There will be no services; please remember her fondly and celebrate her life in your own way. Memorial contributions may be made to Kappa Alpha Theta Foundation, 8740 Founders Road, Indianapolis, IN 26268, or to whatever charity brings you joy. Jeanne loved to make other people happy!

To plant a beautiful memorial tree in memory of Jeanne Larson, please visit our Tree Store

Share Your Memory of
Jeanne
Upload Your Memory View All Memories
Be the first to upload a memory!
Share A Memory
Plant a Tree