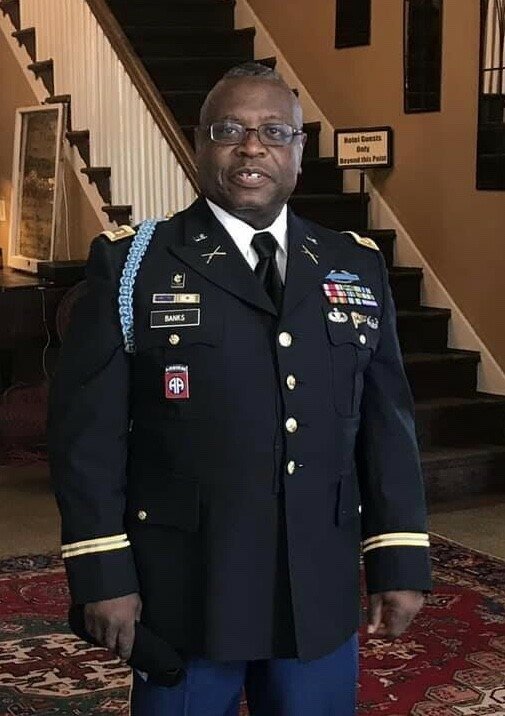 Larry Von Banks passed away after a long battle with end stage renal disease at the age of 67 on June 9, 2022 at 11:45 pm, at Lowcountry Community Hospice House - Agape Care. He was born January 29, 1955 near Port Deposit, Maryland to Samuel and Shirley (née Boynes) Banks.

After graduation in 1973 from high school in Willingboro, New Jersey, he furthered his education at Washington and Lee University obtaining a Bachelor’s degree in History.

During his college years, he also completed Army ROTC and was commissioned as a 2nd Lieutenant. Upon graduation he immediately started his Army career at Fort Bragg, North Carolina. Larry was a combat infantry soldier throughout his military service, obtaining Airborne Wings, Combat Jump, Pathfinder Badge, Ranger Tab, Air Assault and ending his service with the rank of Major. He was stationed at numerous military posts including Hawaii, Korea, Panama, Grenada, Fort Benning, and Fort Stewart. He received numerous decorations including Army Service, Overseas Army Service, Good Conduct, Army Commendation Medal (with 2 oak leaf clusters), and Meritorious Service. After leaving the Army, he worked as a paramedic with Anderson Ambulance in Corpus Christi, Texas. During his time in Texas, he was a personal fitness trainer at Hugley Hospital Fitness Center. Larry ended his working years as an anesthesia technician at Medical University of South Carolina in Charleston retiring in 2019.

After a 24 year friendship, Larry married the love of his life, Cindi, on March 4, 2006 in North Charleston, South Carolina.

Larry is predeceased by his mother Shirley L. Banks. He is survived by his wife, Lucinda Stiving Banks, their daughter, Clarissa (Andrew) LeGrand, his father Samuel G. Banks, his brothers, Eric (Melody) Banks and Marcus (Dagmar) Banks, his sister Crystal Banks, his niece Julia Vickers, and his grandson Grayson LeGrand.

There will be a celebration of his life on June 17, 2022 at 6 pm at Aldersgate United Methodist Church, 1444 Remount Road, North Charleston, South Carolina.

In lieu of flowers, the family is requesting a donation be made in his honor to the National Kidney Foundation (www.kidney.org).

To plant a beautiful memorial tree in memory of Larry Banks, please visit our Tree Store

Share Your Memory of
Larry
Upload Your Memory View All Memories
Be the first to upload a memory!
Share A Memory
Plant a Tree