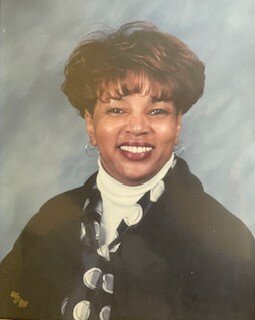 Michelle Denise Brown-Boswell affectionately known as “Chee-Chee or Cheech” was born to the late John and Dorothy Brown on May 26, 1954, in Montclair, NJ.

At an early age, Cheech joined St. Paul Baptist Church where she was baptized by former Pastor, Reverend Calvin G. Sampson.  Cheech was a member of the Junior Usher Board and later became a member of the Voices Choir.

Cheech attended the Montclair Public School system and graduated from Montclair High with the class of 1973.  During her high school years, Cheech was a member of the Original Soul Stompers under the leadership of Father Brady at the St. Peter Claver Church, in Montclair, NJ.  Cheech loved the Soul Stompers and liked drilling so much that she became the first member placed in the position of Captain, a position she thoroughly enjoyed.  Cheech’s wittiness, contagious smile and pride in her big red afro is what led her friends to nickname her “Lucy”.

Cheech received her Certification in Cosmetology from Wilkerson Academy in East Orange, NJ.  During that time, she was employed at The Willow Cafe’ and later at the DLV Lounge.   Over the years, Cheech was employed as a Customer Service Representative with various companies.

Cheech joined New Hope Baptist Church in East Orange, NJ under the leadership of Rev. Dwight D. Gill and was a member of the Adult Choir.

In 2000, she was hired by Verizon Wireless in Morristown, NJ, which later relocated her to South Carolina.  While at Verizon, Cheech held several Customer Support and Supervisory positions until her retirement in 2017.

Cheech’s favorite quote was “But God” which is why she always ensured she joined and remained grounded in the church throughout her life.

After relocating to South Carolina, Cheech joined Lord of the Harvest Christian Faith Center in North Charleston, where she developed and implemented a support group for substance abusers called “Faith Recovery Empowerment Experience (F.R.E.E.)”, under the leadership of Pastors’ Steve and Marlene Williams.  Later she joined Westley United Methodist Church under the leadership of Pastor Julius McDowell where she supported the Health Ministry wholeheartedly.

Cheech was an avid reader and loved to shop.  The highlight of her life was spending time with family especially her niece and nephews, they were truly her heartbeats.  Cheech was always the life of the party and a die-hard Dallas Cowboys fan.

To plant a beautiful memorial tree in memory of Michelle Brown-Boswell, please visit our Tree Store

Share Your Memory of
Michelle
Upload Your Memory View All Memories
Be the first to upload a memory!
Share A Memory
Plant a Tree