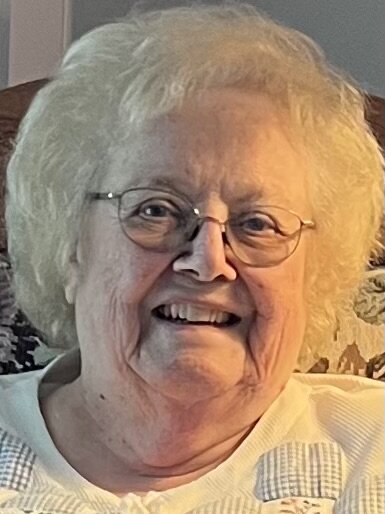 Golfer, wife, mother of two, grandmother of four, great-grandmother of three, dog lover, RVer and traveler, ardent fan of all Boston sports teams, friend of many, enemy of none, and the master of the mayonnaise cake. It is impossible to circumscribe Durelle Cloutier in a few paragraphs. She was born to Robert H. and Addie (Martin) Grover in the Gardner, Massachusetts hospital on May 2nd, 1938. Nine months later, in the same hospital, her future husband of 62 years, Frank Cloutier, was also born. She grew up and graduated from Athol High School in 1956 as did that same future husband. They met in the fifth grade in 1948 and he carved her initials in a heart in a tree.

She then graduated from the University of Massachusetts with a BS in Education in 1960. In 1959 she represented UMass at the national collegiate women’s golf championship. Although she received her teaching certificate, she never used it, because a few days after graduation she became an Air Force wife on June 18th, 1960. Nine and a half months later Cindy was born, and Mark followed on her third wedding anniversary. Over her 62 years of marriage, she made homes out of eighteen different residences. She visited 49 states (missed Hawaii), most provinces and had memorable travels to Scotland to play many of their historic golf courses, including St. Andrews. She evacuated from hurricanes on the Gulf Coast, dodged tornadoes in Oklahoma, survived the Massachusetts blizzard of ’78, and rode out the massive, Good Friday earthquake in Alaska.

Through it all she created a calm and loving household on the chaos often left behind by the exigencies of her husband’s service. Her patience and flexibility, often in Frank’s absence, created the stable home that produced two wonderful children. She loved her dogs: two Samoyeds, a Malemute Husky mix, and four rescued golden retrievers. After apprenticing in a pair of pop-up tent trailers, she accumulated over a third of a million miles in four different motorhomes.

As a result of the many locations and activities, her Christmas card list was much longer than most; and it was certainly more geographically

diverse. If friends are your wealth, Durelle was one of the richest people in the world. She is survived by her husband, Frank Cloutier of Mount Pleasant, daughter Cindy Cloutier of Hanahan, son Mark Cloutier and his wife Heather of Nashua, NH. She also leaves her grandchildren, David Cloutier and Kevin Cloutier of Nashua, NH, Melissa Cloutier Zotos of Hollis, NH and Meghan Cloutier of Manchester, NH, and great grandchildren Brielle Cloutier of Nashua, NH, and Madeleine and Anthony Zotos of Hollis, NH. Her brother Martin Grover and his wife Ann live in Beverly, Mass. In lieu of flowers, a contribution to the Athol High School Scholarship Fund or the Yankee Golden Retriever Rescue League in Hudson, MA would be appreciated.

To plant a beautiful memorial tree in memory of Durelle Cloutier, please visit our Tree Store

Share Your Memory of
Durelle
Upload Your Memory View All Memories
Be the first to upload a memory!
Share A Memory
Plant a Tree